Learn more about our June 9 rappel fundraiser: Sign up for Eye Drop 2023! Can you go Over the Edge?

Live theater is fun for everyone but if you are blind or have impaired vision, you may miss some of the content of the show. Audio description is a tool to help and it is available for free at local theaters, including Fulton Theatre in Lancaster.

“I appreciate the opportunity to provide additional information for people who are not able to see all the details,” said StephJo Wise, who does the audio description of the Fulton live shows, sitting in a booth where she can clearly see and hear the action on stage. “It’s a fun challenge.”

Wise, Fulton Theatre’s Director of Education and Outreach, is a teaching artist and performer, who was recently named Broadway World Central Pennsylvania’s Arts Educator of the Decade.

Audio description gives more information to viewers who are blind or vision-impaired so they can better understand the actors’ movements, actions, or emotions and the set – all parts of the production. It includes the context of the play and background information.

To hear the audio description, people receive a small headset/receiver about the size of a deck of cards. It has an on/off switch, a volume control, and a jack for a headset, which you also receive. You may also bring your own headphones or earbuds if you prefer.

It often features a touch tour before the show to give people the chance to touch costumes or set props.

“We invite people with vision impairments to join us before some shows to do a touch tour,” said Wise. “We bring people to the stage to touch and feel the texture of the costumes and touch important props.”

She said it’s part of connecting them to the show so they have a better understanding of her description of it.

“Some shows lend themselves better to audio description than others,” she said. “Musicals, for example, are easier to describe because everyone can enjoy the music. Some shows have a lot of emotion but not a lot of spoken words and they are more difficult to explain.

“There are shows with lavish sets and costumes and that’s where my role in audio description is extra important,” said Wise. “For example, our recent ‘Cinderella’ show had very lavish costumes, all made here, that included lots of beautiful beading. It is important for people who have vision impairments to touch that first so they have a better understanding of the costumes when I describe them.”

Audio description includes more than just describing what is happening on stage. Wise prepares her own script of the show. To do that, she first watches the show a few times and reviews the director’s script and notes. She makes notes where there are breaks in the action and lines from the actors, so she can add some details. Wise might talk about what the scenery looks like, physical actions or emotions, or summarize the action so far.

“I don’t want to take away from important scenes in the show,” she said. “I want to give context around those pivotal moments.”

Some shows, said Wise, lend themselves to audio describe such as holiday musicals. White Christmas begins in November at the Fulton and Wise expects it to be well-attended.

“People like to come to shows that they know. Holiday classics are always fun because people have a lot of memories associated with them – it might be that they always watched that show with their parents or it was their grandmother’s favorite show, etc.”

Audio description is available for every Mainstage production at the Fulton on the second Saturday and third Tuesday of each production. Wise also recommends that patrons consider attending the shows termed “Pay as You Will,” that allow patrons and their companions to attend and give a donation.

If you are interested in attending and using the audio description tool, please contact the theater in advance. Most theater websites include audio description notes under accessibility on the website. Or you can call the box office and ask if it is available, and request to use it during a show.

Want to find out more? Read this story  about a musician and writer who is blind and enjoys live theater with audio description. 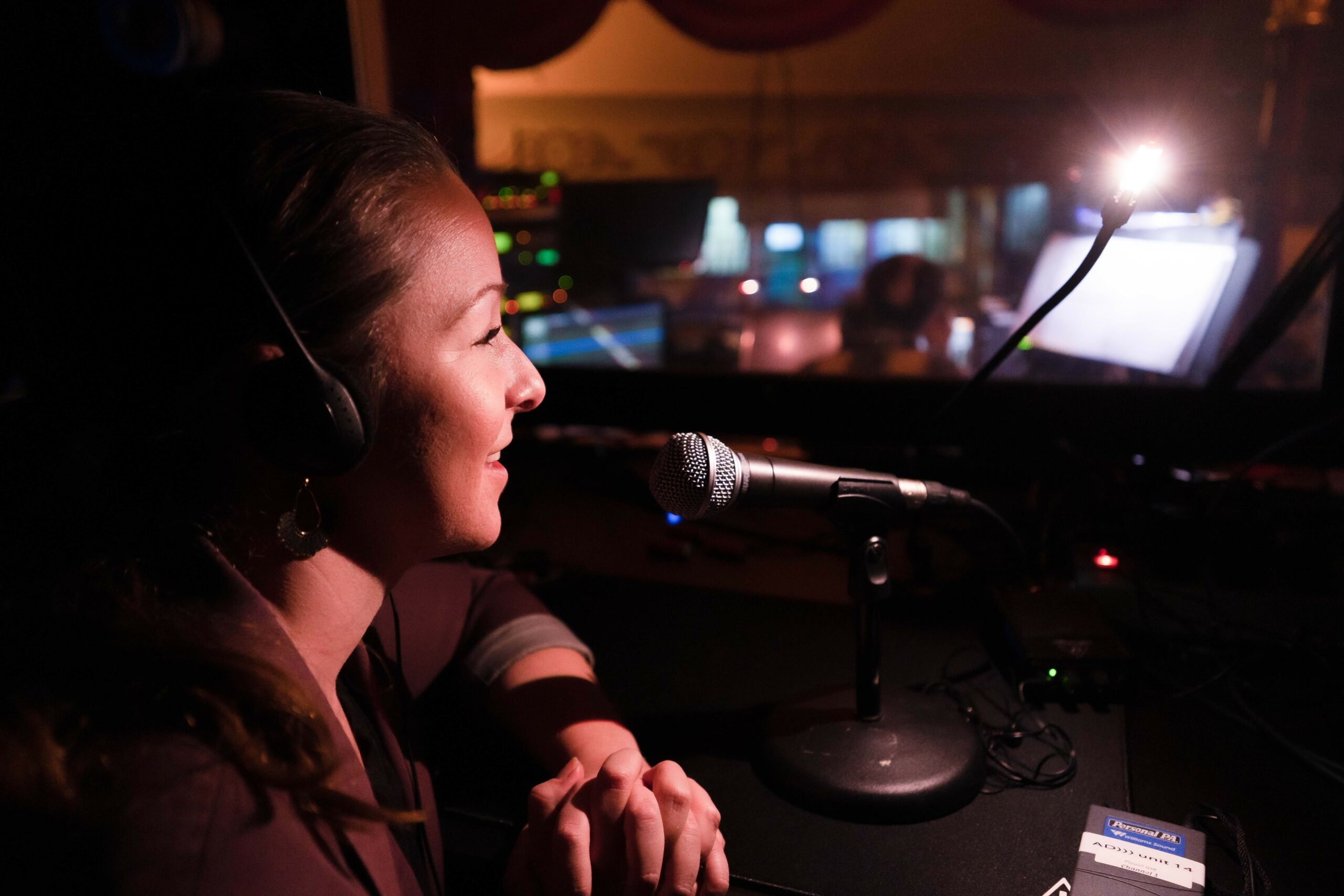 StephJo Wise sits in a booth to do audio description for the Fulton Theatre in Lancaster.